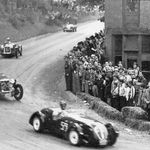 RACING and RALLYING HISTORY:
more information on RacingSportsCars
Raced by Argetsinger in 1950
Raced by Walt Carleton in 1958/9 with a Chevy V8 engine in it

CAR HISTORY:
2007 – eMail from Bryan Hawkins to Chris Berens / Association of Healey Owners
Hi Chris,
I am extremely glad to hear from you! My partner and I are going to need all the help we can get……
Let me answer some of your questions.
First, the photo that you have is definitely of D30. I have the same photo from Cameron Argetsinger, the first owner. I will attach some pictures of the car today. It will require a tremendous amount of work and love before it runs again.
The history of the car goes something like this:
The first owner was Cameron Argetsinger, of Watkins Glen fame. He raced it several times.
Cameron sold the car to Alvin S. Penn, Jr. in 1953. Alvin raced the car several times also and then sold it to parties unknown in 1956.
Now, there seems to be a period that we have not yet been able to unravel. Unknown owners.
Then D30 was purchased by Walt Carleton in about 1958 in Sarasota, FL. It had no engine but Walt believed that it had been raced with an early Chevy V8.
Walt put a borrowed Cadillac engine in D30 for a short time, but never raced it.
Walt gave the Silverstone to his brother, Robert(?), in Hattiesburg. Brother Robert couldn’t work on car. The car probably sat out in the elements during that time.
Walt came to Tulsa, Oklahoma in early 60’s to work for Glen Pray on the 8/10 replica Cord, where my brother Bill also worked. Bill and Walt went to Hattiesburg in about 1966 to bring back the Silverstone. Walt had the car around, with no work done on it, until about 1974 when he sold it to Bill. Bill put it in our Mother’s garage, where it sat collecting laundry baskets and potted plants, until last year.
In 2005, D30 was sold to Ed and myself, brought to Iowa and the restoration started.
There is no engine or transmission in the car. We have considered restoring it to „as raced“ configuration with a Chevy V8, but would prefer to go back to original configuration if possible. Perhaps you might have some ideas on that score. Riley engines are not plentiful here.
The chassis is in good restoreable condition. The body steel parts, especially the floor pans and sub structure on the off side will require a lot of work due to rust. The aluminum body is not too bad, considering that D30 seems to have been raced as an open wheel car at some time. It does have a large cut out bonnet area where the other engines needed access.
I have rambled on and probably told you more than you wanted to know.
We will soon be disassembling the chassis for cleaning and painting, including the front suspension. We are not familiar with this trailing arm front end, so any information, literature, drawings or photos would certainly be appreciated. The rest of the chassis seems relatively straight forward.
Thank you for writing.
Best Regards,
Bryan

per eMail am 17. Juni 2007
Dear Bernd,
this information is in connection with Healey Silverstone D30:
This car is currently owned by myself, Bryan Hawkins, and Ed Mumford. It has been resting in a garage for the last 30 years. As your roster notes, it was originally bought in the USA by Cameron Argetsinger. About 1952 D30 was purchased from Argetsinger by Alvin Penn, but it then drops out of sight for several years, owners unknown. It apparently was fitted with an American V8 engine and raced in that configuration.
The car is now in Cedar Rapids, Iowa, USA and is undergoing restoration back to original condition. Two pictures of that process are attached.
I hope this helps bring your Silverstone roster up to date. If you would like any further information, I would be glad to provide what I can.
Best regards,
Bryan Hawkins